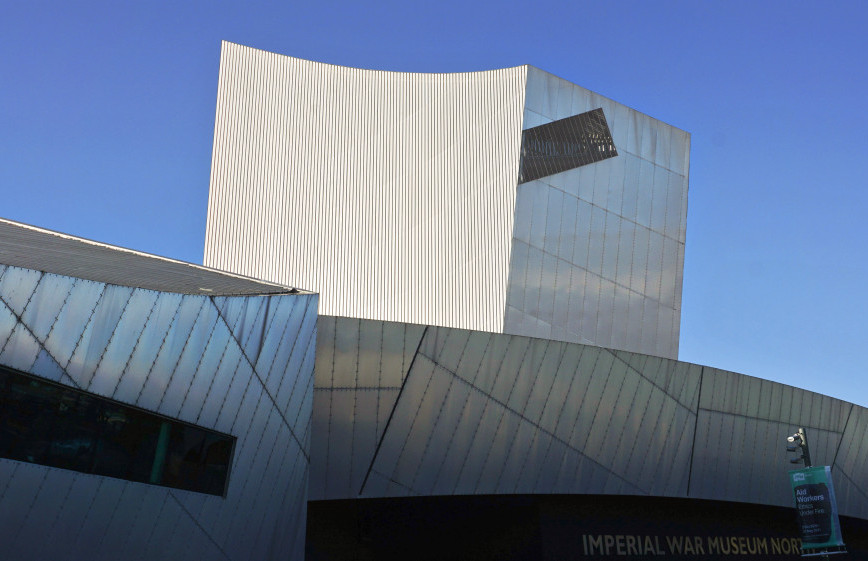 The Imperial War Museum North is one of my favourite museums in the whole of the Greater Manchester area. Growing up in this city, I’ve been told many stories of the second world war, from my parents, grandparents and relatives who’d either fought in the war or were lucky enough to live through it. So when we heard that a museum dedicated to Manchester’s role in World War II, as well as other conflicts, was to be built right on my doorstep, I just knew that I had to visit.

This post may contain affiliate links, which means that when you click on a product I recommend through my links, I may earn a small commission at no cost to you. For more information, click here to read my disclosure page

Located in Salford Quays, it’s built on a former bombsight targeted by the Germans during the Manchester Blitz, as there were plenty of munitions factories in the area. In fact, when the foundations for the museum were being dug out on the former site of the Hovis Grain Silo’s, shrapnel and an anti-aircraft cartridge shell were found. 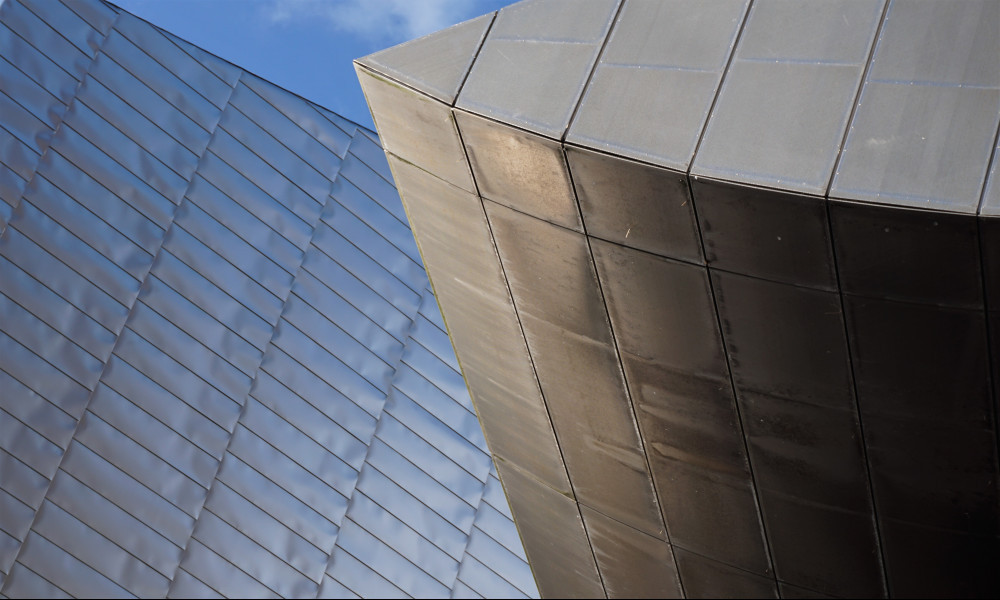 When you approach the Imperial War Museum North, the first thing you’ll likely notice is the huge metal section sticking high up from the roof. Housed in a wonderfully futuristic building, it almost looks like a puzzle that has been incorrectly put together. It was designed by renowned architect Daniel Libeskind and opened to the public in 2002. When I first saw the exterior with its strange shape and aluminum cladding, I just figured it had followed the current futuristic trend that seemed to be appearing everywhere, as the world had just entered into a new millennium. However, I was wrong, as its design is even more poignant than that. Its odd shape actually represents a globe shattered by conflict, and supposedly, all the pieces of the building fit back together. What an incredible idea, right? 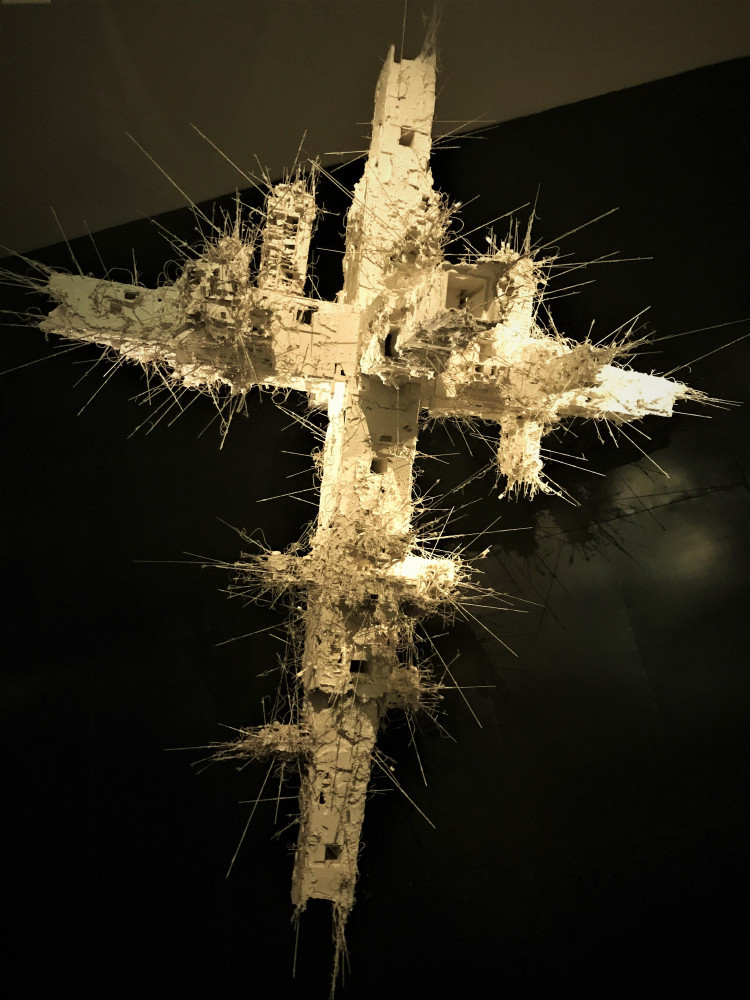 One of the first things you’ll notice when you enter the museum is how dark and disorientating the interior is, further helped along by the slanted floor. There are some really cool displays, such as the Crusader Cross, which looks like it has been created from thousands of spikes, and the wall built from evacuee suitcases. Some still have their original owners’ addresses printed on them. 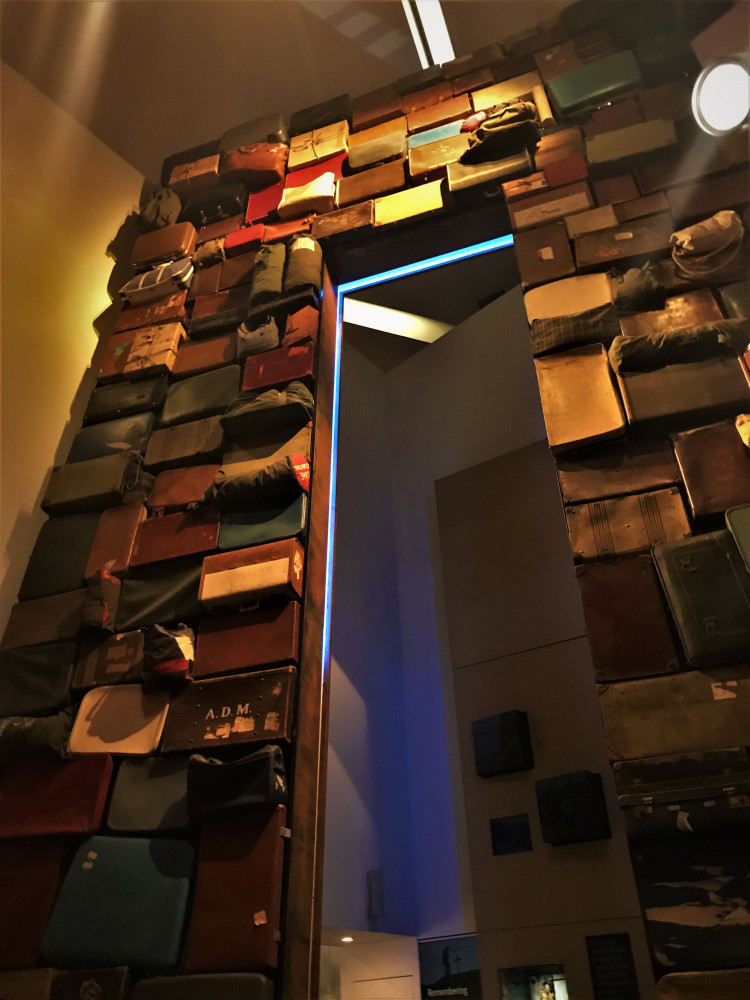 One of the best exhibits is the mini-movies which are shown every half hour or so. The museum lights will dim, then the films are projected onto the walls around the room. They show a variety of past wars but mainly focus on World War II. There are seats around the edges of the museum, and you are encouraged to take a seat, put your camera away, absorb everything and watch stories from survivors who came home with tales from the front line. It is loud and in your face, but war is never quiet, is it?

Once the lights come back on, you can continue to immerse yourself in Manchester’s war stories. I felt super uncomfortable as I walked around the area that displays the nuclear war exhibits, complete with an old deactivated (obviously) nuclear bomb. This sent a shiver up my spine, especially when I saw a map on the wall of Great Britain, showing the distance with which a nuclear bomb would cause devastation. 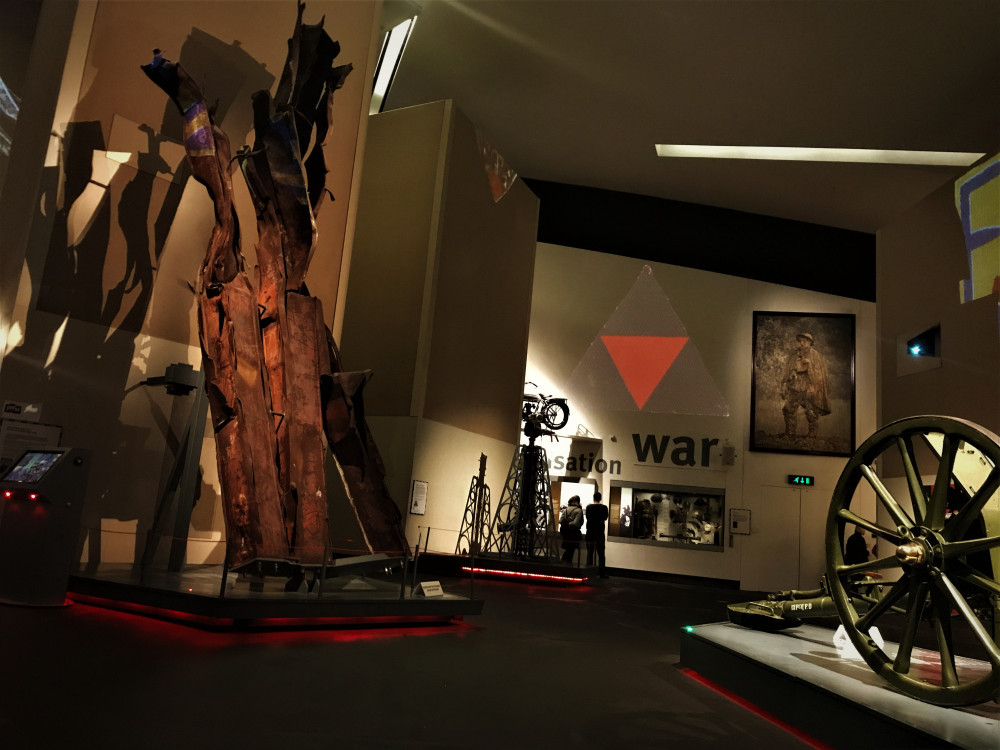 The saddest part for me was seeing a display of some unassuming twisted steel frames. I started reading the description displays and found that these metal pieces were from the original building of the former World Trade Centre terrorist attack in New York. Being such an important part of history, seeing a fragment of this 2001 building up close was very confronting for me.

Before you leave the Imperial War Museum North, and to finish your trip in style, why not head up to the excellent observatory, which has cracking views right across the Quays. It’s well worth a look. 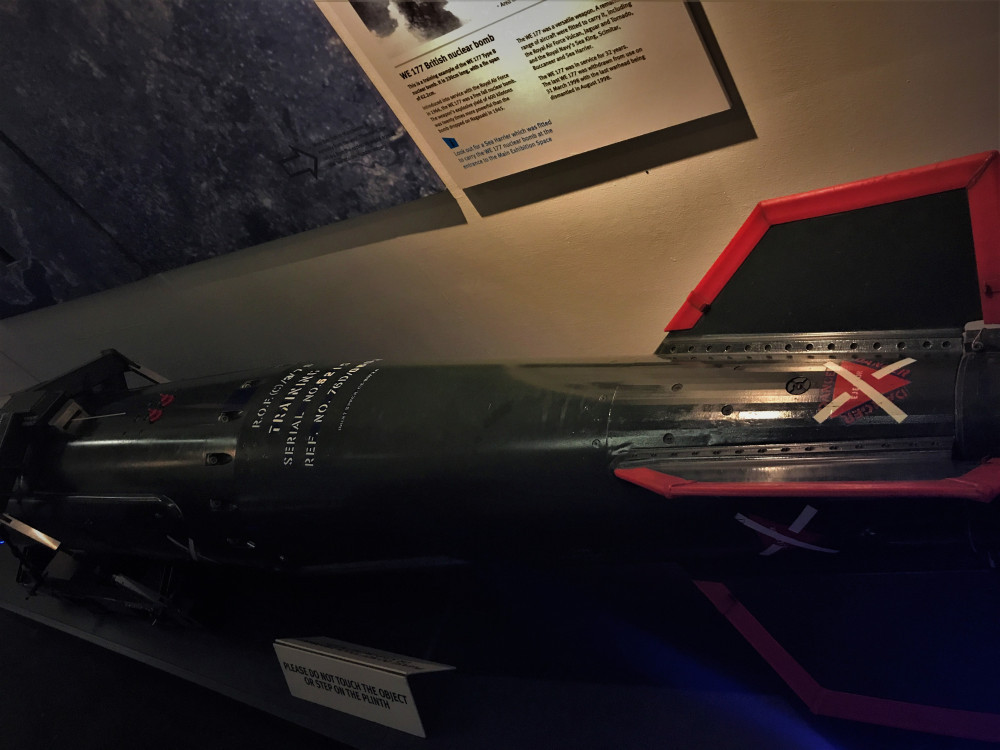 KNOW BEFORE YOU GO 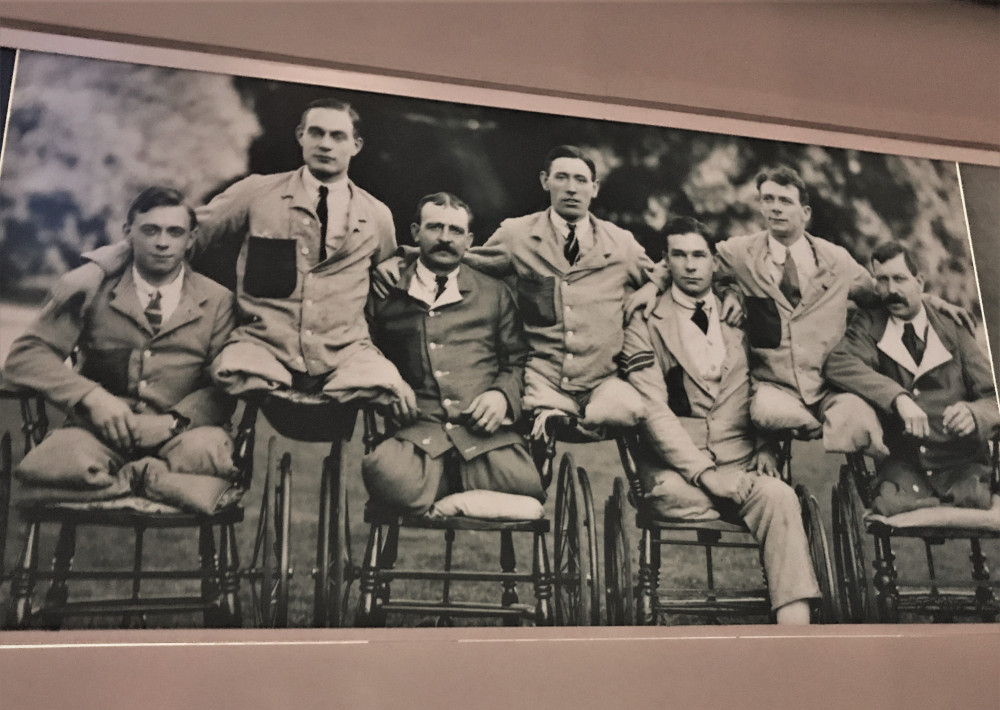 Thanks so much for reading my post today on the Imperial War Museum North. When you visit Manchester, I hope you’ll consider adding it to your itinerary, as it really is such an emotional experience and makes you thankful that England is no longer at war. It’s great for anyone to visit, except for very young kids, due to the graphic movies shown and how loud they’re played. But everyone else should make an effort to go and learn about the Manchester Blitz and how we’ve fought in various wars over the years. Have you been to IWM North? What did you think of this fantastic museum? Or will you be visiting when you’re next in Manchester? Leave me a comment below.

Like what you read today? Click on the link below and subscribe to my blog for more of my travel adventures, freebies, and inspiration for your next trip. 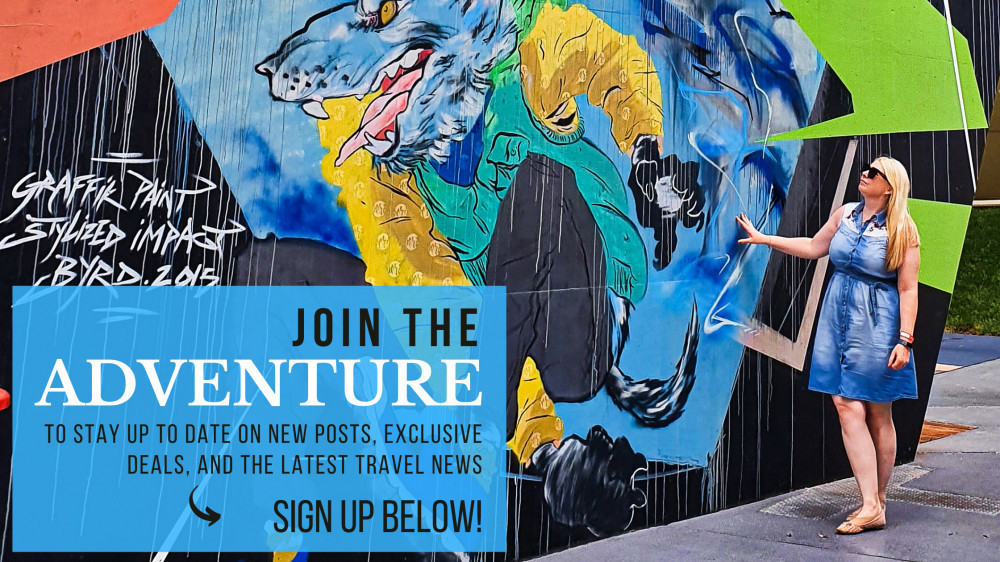 Still looking for more inspiration to help plan your trip to Manchester? Then scroll to the bottom for more posts from my home city.

8 thoughts on “MY GUIDE TO THE IMPERIAL WAR MUSEUM NORTH, SALFORD QUAYS, MANCHESTER”

A QUICK GUIDE TO VISITING THE FANTASTIC SALFORD QUAYS & WHY YOU SHOULD ADD IT TO YOUR MANCHESTER BUCKET LIST!